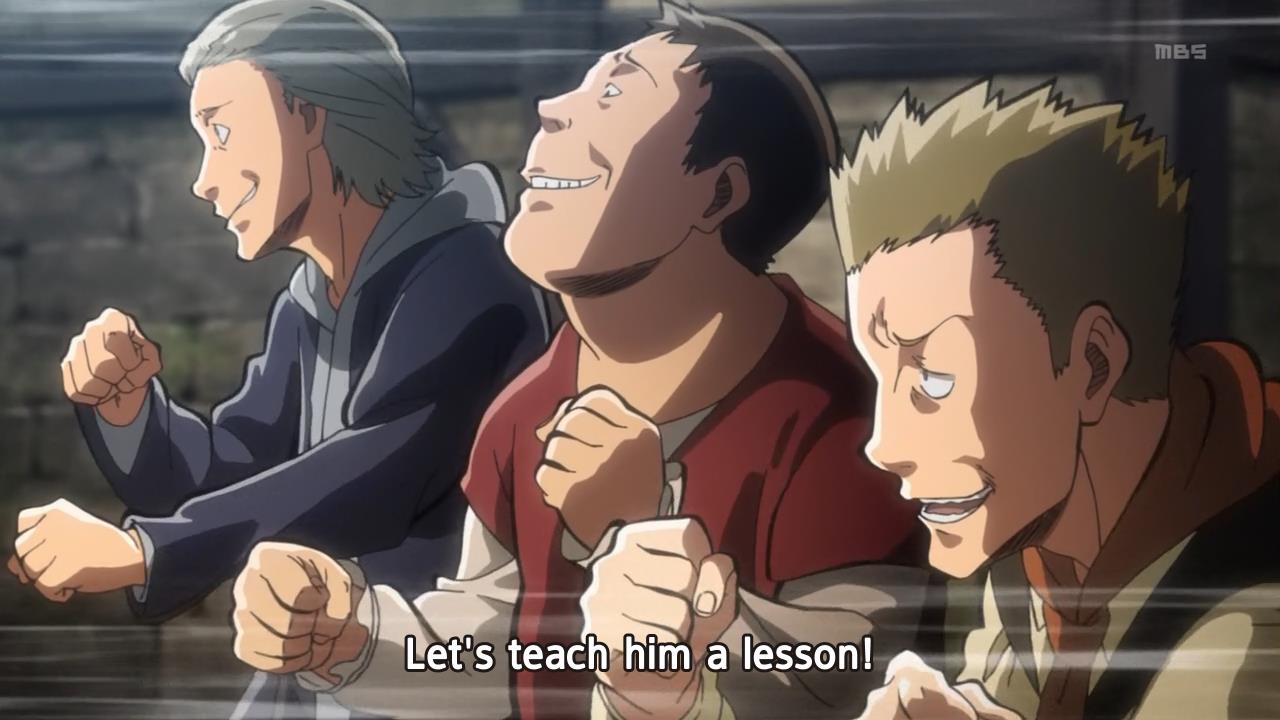 
Full disclosure: I’m part of Saizen so this will not be a fair review.

Wap Level: Don’t recall anything that would allow for any wap.

Fansub.co screenshot comparisons: http://fansub.co/shingeki-no-kyojin/  (first time I added any of these links) OP. Messed up this faintly Orwell-esque line in the song. Supposed to be something like, “The complacency of the livestock and a false peace.” One part of the OP where you probably should have added a Germanic word (jäger).

Edit: Also, as pointed out by Rekyu,  the official lyrics says it’s supposed to be hofuru (to slaughter) not houru. This of course means they can’t mimicopy for shit. No ED in this episode. I see what they’re trying to do here, but I would have had these guys be sarcastic and say, “That was a stirring speech, kid!” since the guy said isamashii.

Not sure if I like this phrasing. Yes, she does say yaku ni tatsu (be useful), but I feel there must be something better, like “served his purpose” or “fought the good fight.” They say kamo ni shite yaru which means something along the lines of “treating someone like an easy mark” or “treating someone like a sitting duck.” Eren is making himself an easy prey for these guys by trying to engage them. I probably would have went with “I guess he wants a beatdown!”/”Then let’s give it to him!”  But I guess this works too. He didn’t actually say anything about “non-military interests,” (the only thing closest is the phrase heta ni soto ni deyou to shite or “go outside carelessly”) but if they omit that element from the translation, viewers might be confused at to why the Recons get to go outside the walls if doing that was prohibited by the King’s Council. Every one of these lines was over my (arbitrary) limit of 20 characters per second. In case I’m Doing It Wrong™, what I do is c/p the lines from the script onto Word, use the wordcount feature, and divide the characters (without spaces) by the line duration to determine whether or not a line is over the limit. They say the new Aegisub builds have built-in calculators that do that shit for you, but it appears they count the characters including spaces.

The script has almost no mistakes and it doesn’t read like it’s been translated from Japanese. It’s pretty much all I could hope for. Someone asked me to review this episode, even though Saizen released only one episode due to licensing. At first I said hell no, but then changed my mind for no good reason. Actually, based on the fact someone from my group wanted me to review a dropped project, I should have acted like one of those football coaches whose son is on his team. If the kid wants to make first string, he has to run those 50 extra laps, do 80 extra pushups, and do a bunch of 40s under 4.5 before he can even think about first string.  But, admittedly, they didn’t really leave me a lot of room to get harsh with my grading, as it should be since apparently this was released a week after the episode originally aired.