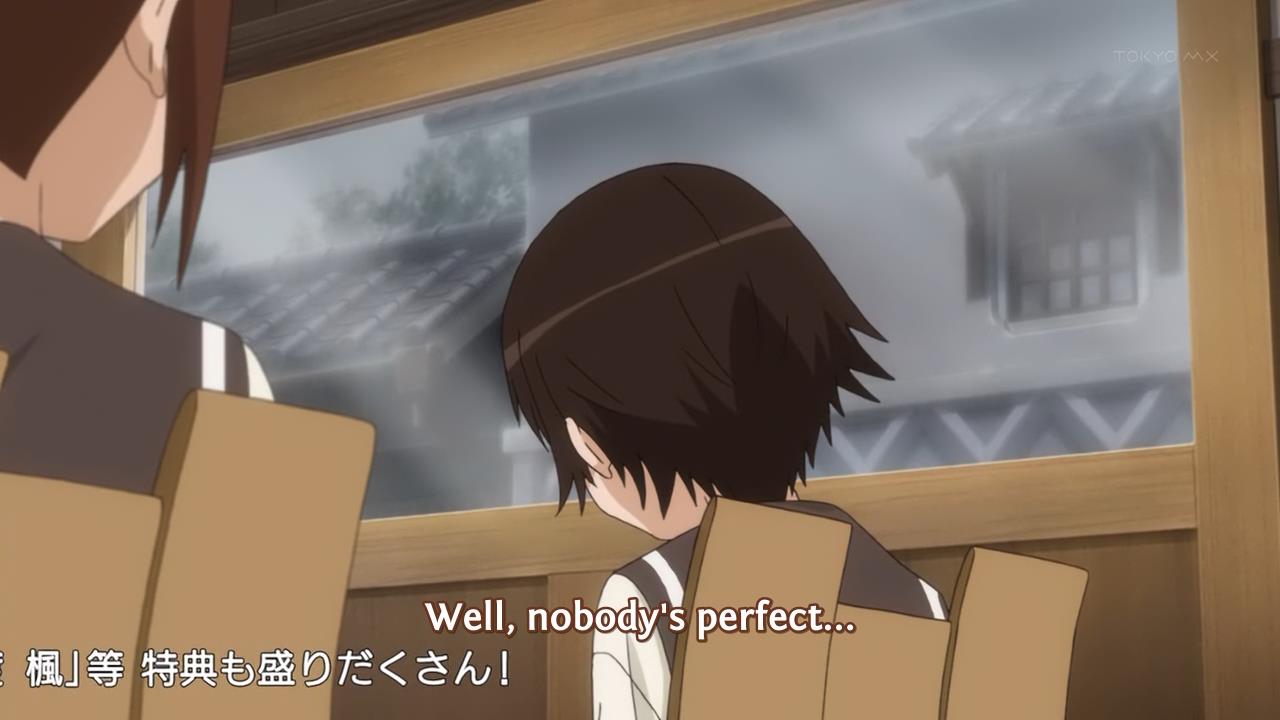 
So… what was this episode supposed to be about again?

Wap Level: Full Wap (“[O]nee-sama” used both as a proper noun and an honorific, for example) OP. Literal translation of this line is “I like you when you have your honest face,” but luckily Nishi-Taku realized that the singer was talking about taking pictures and adapted it that way. Rest of the OP is just as sensible and poetic. ED. You notice how the English lyric here doesn’t match with what the above  Japanese says? That’s because they decided to translate the song into natural English instead of Yoda-speak. Of course, the ED is handled well. Actually Dark-Haired What’s-Her-Face-chan (aka Maon) says “His name is Kameramera. He’s an Aquarius born in Cameroon…” Not a mistake, just pointing out how much more retarded this line could have been. This sounded like a narration instead of a spoken dialogue, which wouldn’t normally require any quotation marks. As funny as this and the next four lines are, they’re wrong. Norie’s actually saying “Turtle! Nan! Dez!” Apparently none of the other groups got this line right either. This is how they decided to treat Fuu’s verbal tic of adding the node copula at the end of a lot of her sentences. My reaction to this falls somewhere between neutral and “ummmm,” mainly because it makes me think of some stereotypical Cockney person in my head. I would have went with “social studies field trip.” Correct me if I’m wrong, but isn’t komachakure supposed to be a play on the name Komachi?

I will now like to interrupt this poo-flinging to highlighting a bunch of lines that really impressed me (meaning I will likely steal them for my own scripts). My first draft of this line: “It’s only because you got finished early and came to make fun of me.” My first draft: “Well, those things happen too.” My first draft: “That is very reassuring!” My first draft: “From the very beginning it’s just one obstacle after another.” My first draft: “Even if you aren’t able to do it at the start, you’ll get better as time goes on.” First draft: “Then isn’t that good?” First draft: “What’s with what you said just now?”

Needless to say, their versions of the lines are better than whatever generic translations I would have come up with right on the spot. I learned a new phrase :) Learned another new word, but it probably won’t be something I’d employ any time soon. It’s a simple line (a, minna) but even translators who should know better would translate the line to “Ah, everybody!” or some other dumbassery. It might seem like a non-issue to others, but kudos to Nishi-Taku for actually writing this line in natural English. One of the few literalish-sounding lines in the script. I’d probably go with, “I was destined to take up the camera!” or something. Another line that used a well-worn stock phrase. One can easily tell that this “Potte” character used the word ganbaru in this line. It appears Nishi-Taku is in the “treat dialogue scripts like prose” camp and decided not to bookend each line that is part of a quote with quotation marks and opted instead to put the quotation marks around the entire quote said by the character, even if it takes up multiple lines. This practice may be right for a novel, but for subtitles it just looks weird, especially when one is trying to discern which line is a quote and which one isn’t. The Tamayura series is an anodyne, sleep-inducing, cookie-cutter slice-of-life dramedy that stars a annoyingly meek high-school everygirl who we’re supposed to find “cute,” but who is really just in desperate need of an intervention provided by some wise-cracking male lead from a Key visual novel (and even then it’ll still suck).  It was a total chore to watch this episode, and honestly the only thing I enjoyed about this show is the subs. All things being equal, this release could have very well been the first A-plus I have given this season, since I found myself taking notes on how to spice up a script. However, in order to get an A-plus, the release needs to be free of errors, and unfortunately that “Turtle-riffic” thing happened.