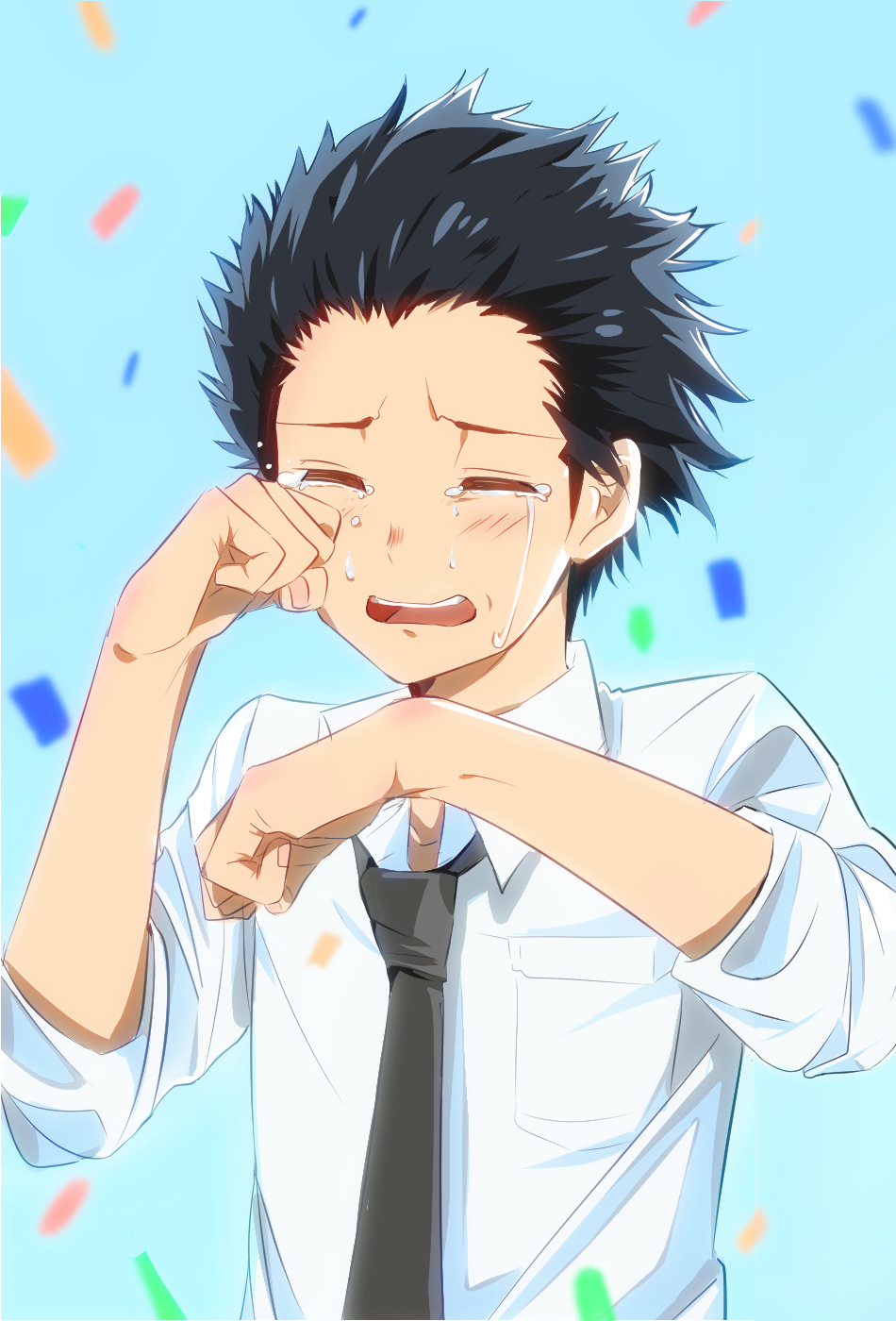 Well, assuming you’re literate enough to read the title, you probably already know what I picked. Something which no matter what couldn’t be better than the greatest anime of all time, Shinkai Makoto-san’s masterpiece: Koe no Katachi. An expertly crafted mind-bender, were it not for the tiny detail that

But even if it couldn’t live up to such cinematic ✮perfection✮ , it’d have to come close. I mean, MAL wouldn’t lie to me, right? MC-kun is an irredeemable cunt who bullies people and then plays the tragic victim when things don’t go his way. The only point at which his character developed enough to pique my interest was when he attempted an olympic dive into an aqua system more shallow than Mississippi’s gene pool.

Unfortunately, that was only a minute into the movie, and he somehow botched the landing, following it up with an unbearable two-hour runtime of nauseous whingeing. With motivations as meaningful as nipple hair, I’m not even sure why this sack of intolerable louts was included in this film. Fujoshi are too stupid to like anything other than Touken Ranbu and that gay hockey show anyway. The only redeeming factor of the girls is how completely fuckable they are. And like holy shit would I be first in line to go to jail here.

Mayushii is the hottest of the girls, so she’s the most just. I think her main point through the story was “if you have social anxiety you should drop from a roof”.

As such, she is the only objective winner in the series, and also my waifu who totes does not love MC-kun. If you say she likes Naota more than me you are 100% wrong and I require you to apologize post-haste.

The moral Miki teaches is that if you whine a lot, you’ll be forgiven, just so long as you’re a cute girl. (With the exception of when it’s plot-necessary to bully a ky deaf girl, of course.)

She’s not wrong, but I also feel like many girls vastly overestimate how cute they are. If there’s a remake, perhaps we could get a Mitty-face instead of a 10/10 qt to drive that point home. I don’t remember her name, but she’s kinda like that girl who says “futsuu” all the time in Kyoukai no Kanata, which is super hot. Please don’t infer my fetishes from that. Whether you’re wrong or right, we both lose.

KnK starts off start off with MC-kun attempting to commit suicide, and then fucking it up, cuz why not fail at life and death?

But how could this tragedy happen? Let’s blame the source! It’s -flashback time-

After spending half the film’s budget on a The Who license, we’re introduced to a new girl coming into MC-kun’s class. And she’s deaf. Oh noes?

Damn right, oh noes. This is Japan and we’re about to watch how the most progressive culture in the world hammers in handicapable nails.

Following that, we get a flash forward to post-suicide MC-kun, cuz timeskips are easy ways to “tell” stories.

Due to him being a trashbin cunt, everyone in school now dislikes MC-kun. Facing social rejection from all corners, MC-kun switches his attention-whoring gears to becoming a sycophantic pity-monster, sucking the life out of anyone unfortunate enough to happen across this black hole of misery.

We’re then subjected to a bunch of stupid mini-arcs, where MC goes around, “getting the gang back together”, which consists solely of people from his childhood who never really liked him in the first place.

During this sad display of desperation, he also tries to steal a base or two on deaf girl, whom he has determined is his best chance of getting laid, outside of going full-on male feminist.

After a bunch of cringeworthy, reddit-tier nonsense, culminating in a pity party on a cheap-looking bridge, he drags deaf girl into committing suicide, and in doing so manages to fuck up the one thing in her life she could actually excel at (other than being super hot).

Marking the first time in animation history a meddling kid gets their comeuppance, MC-kun is then thrust into a coma, which by some amount of chromosomal fuckery results in everyone in the show heterosexually jacking one another off like it’s Sakuracon 2017 in my room.

Through the power of an even bigger waste of semen than my sister, MC-kun rises from the potato-grave, ready to ruin people’s lives like also my sister. …God, I hate her more even than bitching about bad anime.

Anyway, off to a Halloween fiesta with some Michigan nakamas. Here’s to hoping I nail a catgirl. Happy Spookymore, everyone. <3