Disclaimer: I did not write this. Just posting it for a friend of mine who wishes to remain anonymous.

All names have been changed to protect the identities of the original persons.

Every once in a while, I get it in my head that I can help some group that is known for being the Snooki the crop. They just need a little guidance,” I tell myself, nodding resolutely. “A little nudge in the right direction”.

It all started out when I offered to be an editor for Hadena. Their test was a Toaru script, and since I had no idea what was happening, I just re-wrote every line to whatever I wanted. I passed with flying colors. Being in a group where I have the freedom to experiment in my edits would be so sugoi!

I announced to my group the good news, and promptly received a PM from an editor:

I totally ignored him.

[20:12] Daphy: it would be hilarious to start releasing a-quality episodes

The acting leader, bragoon and I decided that I’d start out editing an episode of Recorder to Randoseru.

Beginning a member-group relationship by inherently distrusting your recruits from the onset. That’s new.

The script I got wasn’t timed, and it had no font (font is important so I can watch out for three-liners), but it was more or less editable. 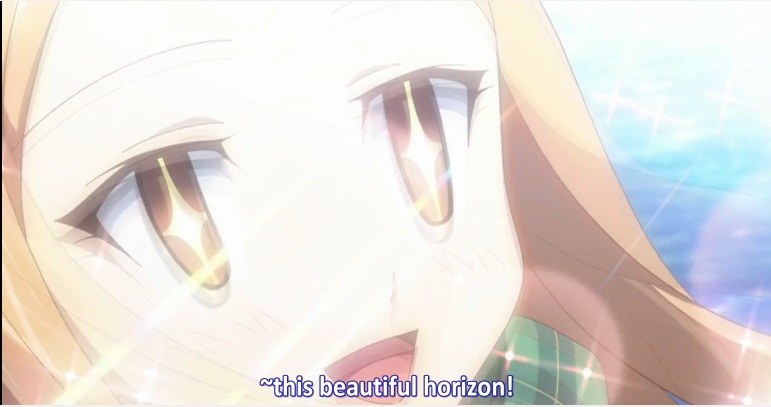 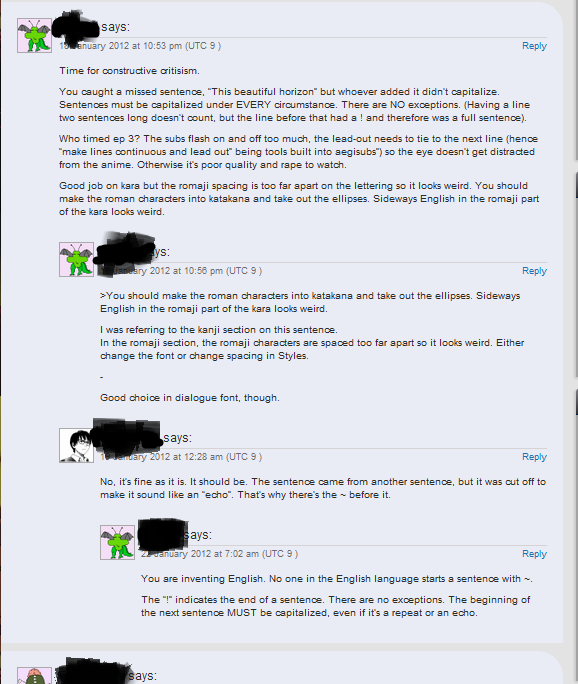 First, great Zeus sent me a messenger. Then, he sent me two omens. I failed to heed his warnings thrice.

A few days later, I was invited to edit an episode of Brave 10. A show with hot guys fighting each other in the wilderness? How could I resist? 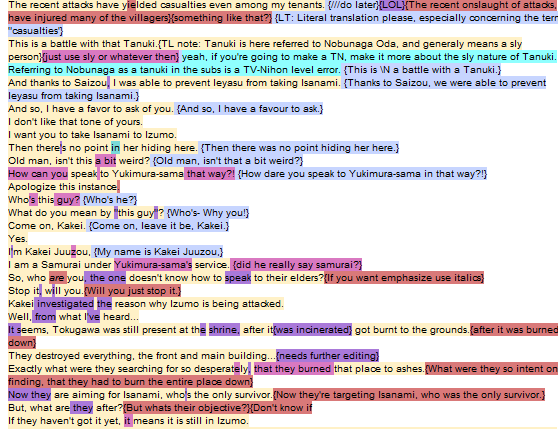 By the time I got to the pad, the episode script looked like toasted diarrhea with cheese. TL note/Edit/QC brackets were everywhere, and the lines were infested with the colors of a thousand different edits. I shook my fists at the gods.

I got marashi, the TL, to get everyone who was adding errors to the script off the pad, and once we cleared out the ten thousand brackets of hell, we found a diamond in the rough underneath. His script was perfectly editable. Mika-chama and Naze (the only two competant QCs available) were left to check my edit. Finally, I started editing at the pace that marashi was translating. Sure, there’d be some errors, but fuck you. Hell yeah. We were on a roll. We’d be done, any minute now.

Somehow, the pad with only 5 people on it got leaked and raided by Commie, but nothing they could do to the script would be anywhere near as bad as what was coming.

Ana-chan came. And he came all over the script, with a spewing vengeance. He systematically began to arbitrarily re-arrange all the sentences, turning our “not too shabby” script to a “toasted hobo vomit” script. I shivered as I heard all of the innocent words and grammars of the script howl in bloody agony, as Ana-chan systematically massacred  them all: 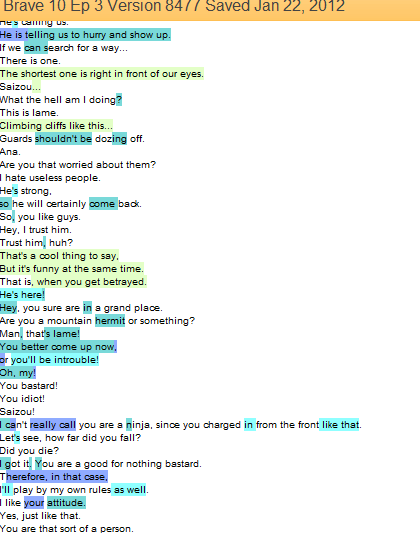 I sighed as I watched Ana-chan (light green) and his minion Kayate (the lighter turquoise) systematically go through and rape every single line of our finalized script. English was massacred for the sake of Engrish. Logical sentences were thrown off a cliff to favor of incomprehensible randomness. Random prepositions were added to the ends of sentences. Capitalizations were stationed after commas. Ellipses were everywhere. Spaces between words were deleted. If there were any real mistakes, they were ignored in favor of adding random things like apostrophes. It was ugly.

“Don’t let people who can’t speak English touch the script after Edit!” I screamed into the staff channel “Let them make TLC notes somewhere else, so someone who knows English can add them!”.

“Ur da 1 hoo can’t speek Ingrish!” Ana-chan, the grammar troll, shot back, breathing heavily as he slaughtered more innocent grammars, speeding up and smirking as he did so.

Somewhere in between all this, I left because bragoon put the staff channel on +m and started de-voicing people:

I came back to find Ana-chan bent over a noun, vigorously thrusting and pumping away. “For the love of Hera, save the script! Stop him!” I shouted at bragoon.

Um, dude. Take a hint. I rage-quitted and stuff. That implies our interaction is to… you know, end. Sticking around is sorta… awkward. I know it’s PM, but at least pretend that one of us stormed out and left a dramatic flurry of wind behind us.

Hell yeah! Maybe we can compromise. If he’s STILL messaging me, then he must have realized—

Wait, what? He’d rather buy off my compliance than fire the people who are killing his group?

150 thoughts on “The Horrors of Helping Hadena”