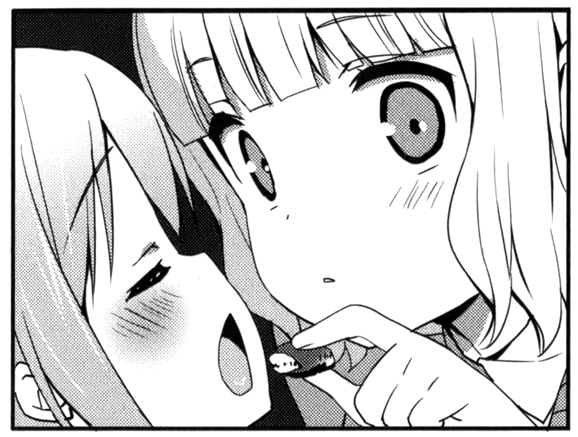 tl;dr: A bunch of randos go on a bus trip to a spooky town. Is this just a metaphor for passing on cuz -le twist- they’re already dead? Holy shit, that would literally be the worst thing ever.

I was so prepared to give this show a failing grade cuz it looked like P.A. Works spent a bit too much on a hookers & blow and had to make the difference up somewhere. But then I skimmed the first episode and found a chick who habitually vomits on people, so now I’m in love.

Besides girls leaking fluids, though? Look, the thing with Mayoiga is that it’s setting up this grimdark environment, ripe for people murdering the shit out of each other. Yet with the first episode’s hesitancy to actually show anything darker than kids talking to one another in a bus at night, this is shaping up to be the 4Kids version of Another. And Another wasn’t even that good.

My hype is pretty low here. If someone doesn’t die in the next episode, I think we can just call this one a bigger failure than my sister. tl;dr: Phoenix Wright is a struggling squiddtorney at law and blahblahblah who fucking cares

Sorry fellow oldfags, but it’s time to move on. You remember how Rozen Maiden failed, right? My innocent heart couldn’t take that again. ;_;

All in all, it’s not the early 2000s anymore, and that’s probably a good thing. Give me something new. tl;dr: Jimmy and Brad are your average American teens, until one day a comet hits their small town, transferring them to the secret world of Aslandia. There they must battle the evil King Margoon who is oppressing the populace because he is evil. It is a touching tale of growing up and doing the right thing even in the face of overwhelming odds. Lik dis if u cry evertim.

This looks like it was originally made to be a mecha, but then the studio decided Fantasy was more hip these days, forcing the production team to replace the setting and weapons, but nothing else. Cheap and disjointed like all Brain’s Base series, there is no reason to watch this unless you’re on a suicide-by-anime run. tl;dr: Girls who aren’t fat pretend they know shit about being gourmands.

The basic concept is so stupid that the fact it even got an anime adaptation gets a rise out of me. With the source material being a fucking 4-koma, Asahi would knead to be baked to give it a full-length series.

Lucky Star and and Azumanga Daioh only managed to surpass their source material because they had things for the characters to do beyond the food fetish pandering. Here, all we get is a baker’s dozen of fifth-grade special needs kids with an unhealthy fixation on bread.

You’ve got nothing to grain by adding this to your watch queue. Even if you’re about that gokkun life, your time would be better spent rewatching Koufuku Graffiti. At yeast that show had a budget. Concept pitch: Remember Yuri Kuma? Well how about if Yuri Kuma was bad? And then what if it wasn’t? Turned my generic comparison tagline into a plot twist on ya. Everything in my literary career’s been leading up to this moment! Kuma Miko’s a lighthearted slice-of-life set in the Japanese countryside, based around cheap gags and obscure Japanese cultural references. Normally, I’d be out on this — haven’t liked a slice-of-life since… shit, I can’t even remember. Hell, I didn’t even like Bakuman. But Kuma Miko? Fuck, I am all in. This is a series about legitimately enjoyable and relatable characters. And really, that just boils down to a country bumpkin and her bear friend. But if it’s enough to warm even a heart as cold as mine, most people can expect heartburn in the best possible way.

Keep your expectations in check (cuz this is a slice-of-life no matter how you cut it), but you can count on this to reach as high as the genre will allow. Get ready for some zutto happy days.

Re:Zero kara Hajimeru Isekai Seikatsu (Re: Life in a different world from zero)

tl;dr: This is shounen done right.

Light Novel: I’ve got a link, but…

So, hm… what the fuck do I say about this show to get you to watch it without spoiling why? Cuz this is sure as fuck a series you wanna go into with only the vaguest of ideas at first.

Let’s do a choose your own adventure:

Wow. You picked option 3: “Trust D_S, but click the spoiler anyway, cuz fuck if I’m gonna miss out on any sagey content”?

Motherfucker, we’ve got ourselves a fantasy-land groundhog day. And if that doesn’t make you wet as a pool, you may need to consult a doctor.

If that was the only trick this series had up its sleeve, it would still be one of the better shounen in recent memory, but oh damn that’s only act 1. Don’t miss this shit, my tomodachi-tachis, it’ll get your blood running at about the same level as SAO or DanMachi. Combine those with the spirit of Akame ga Kill and you’ve got yourself one sexy shounen stew. At first I got really excited by 12-sai. I mean, Kyou no Go no Ni was fantastic in all the wrong ways. But then I realized that 12-sai had nothing in common with Kyou, other than that both their titles were Japanese. ._.

If elementary school girls are your thing, 12-sai will be the right show for you. And I suppose some of y’all may have more pure, legitimate interests in a coming-of-age story focused around a 12-year-old girl. However, I am definitely not the target audience here, so I’ll be skipping out like I imagine this show will reveal MC-chan’s dad did.

If you love me:

If your only alternative is being a normalfag:

If you’re looking for reasons to die:

Okay, time for sleep. Hanging out with some IRL pals for most of tomorrow, but I’ll try to get Part 3 finished before I pass out (only if my arms aren’t too sore by that point).